She enjoyed a series of romantic outings with her on-again beau Justin Bieber in New York this week.

But Hailey Baldwin, 21, took some time for herself on Friday, going on a solo outing looking comfortable, yet casually stylish as ever. Styling: Model Hailey Baldwin, 21, is seen looking stylish in a large blue jacket paired with Adidas trainers as she steps out by herself on Friday after she enjoyed date night with boyfriend Justin Bieber, 24, at Cipriani in New York City

The daughter of Stephen and Kennya Baldwin was seen out and about sans Bieber sporting a large, blue jacket paired with Adidas trainers.

Under her jacket the beauty wore a black, cropped tank with navy, high-rise gym shorts.

Her blonde locks were slicked back and tied back into a lower bun. She had minimal makeup on.

The TV personality also had on big, gold, hoop earrings, a necklace and several diamond rings. Flashback: Justin and Hailey dated briefly from 2015 to 2016, but recently it emerged they had re-ignited their romance 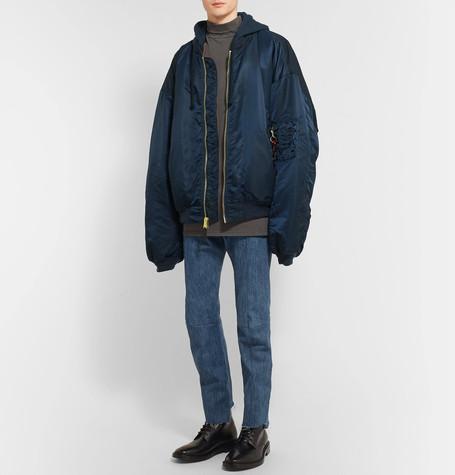 Oh you thought the bomber trend was O-V-E-R?

Nope. This street style staple is still a major thing. You might not see every other person wearing one as you walk down the street, but those in the know are totally rocking a bomber this spring/summer season.

And who could be a cooler style icon than Hailey Baldwin? The blonde beauty is always on the cutting edge of fashion, and can often be found in up and coming labels as well as high end designers.

Hailey’s over sized bomber is by celebrity favorite streetwear label– Vetements. Variations of this topper have been a staple piece of the brand for a few seasons now and the most recent incarnation seen here on Hailey toys with silhouette and features a built-in hood.

The good news? You can buy an exact copy in black on sale over at Matches Fashion. (Click right). But if you’re hot to nail your off-duty in navy then head to the edit below for our favorite alternatives.

* PRICES MAY NOT BE AS ADVERTISED

Hailey really came into the spotlight when she began dating Justin, 24, briefly from 2015 to 2016.

It has just recently emerged that they have re-ignited their romance.

Their newest go at a relationship was confirmed after they were pictured passionately kissing around the Big Apple on Sunday.

The Baby singer couldn’t keep his hands off girlfriend on Thursday either, as the 24-year-old pop star was spotted at lunch at Cipriani’s with her. Stuck on you: Justin Bieber couldn’t keep his hands off girlfriend Hailey Baldwin as the 24-year-old pop star and the model left Cipriani’s restaurant in New York holding hands

Despite going their separate ways and Justin’s reconciliation with his on-again and off-again ex-girlfriend Selena Gomez, there was always a special place for him in Hailey’s heart.

A source told Us Weekly: ‘They’ve had this weird thing for so many years. He was a very important part of her life way back when and he always has a special place in her heart.’

The insider added that the two are ‘in a great place’ and that Bieber is ‘very calm and normal.’ Dating: Hailey and the Canadian crooner’s relationship was confirmed after they were pictured passionately kissing in the Big Apple on Sunday

They were engaged to be married before their shock split …